This Forum has been archived

Hey wassup guys, I was recently thinking about completely redesigning this wiki. IMO we could make a Hot Pursuit style theme. I've already make some wordmarks, but this here is the best one I made so far:

What do you guys think about it? And more importantly, how do you think the mainpage should be designed?

OK this right here would be my concept for our mainpage (yes I know this sketch pretty much looks retarded):

Of course we don't need to take mine, we can modify this thing a lil bit or use a better pattern if possible.

We could use a black background for this main page. On the left and right I don't know what we could put, but JerryWiffleWaffle's suggestion might be an great idea. CMAN122 14:15, March 13, 2011 (UTC) 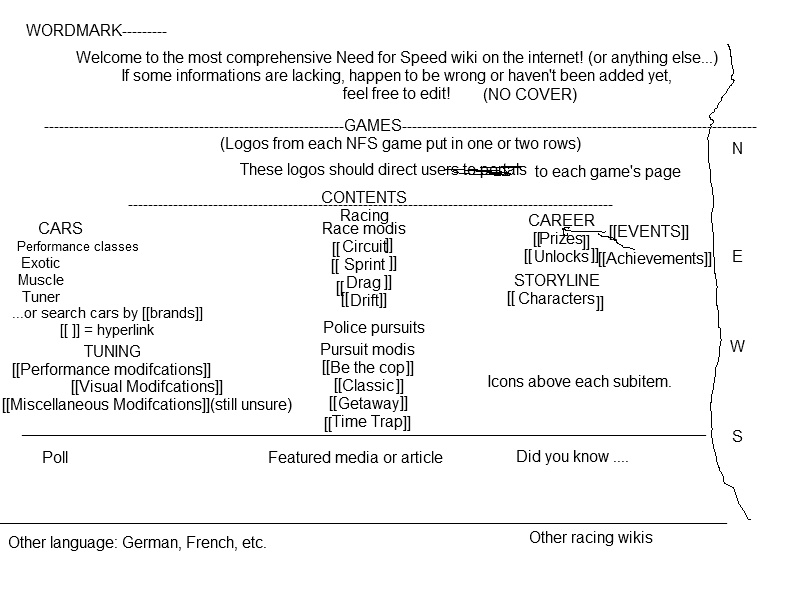 Before I forgot, we should also replace our favicon with one of these:

What would you guys pick?

I like your idea of the main page and the Favicon I think should be the NFS icon that is used in the games (the first picture you posted for the favicon). Also, I created a Car Specialties article from Underground 2 that could go under the Miscellaneous Modifcations. For the types of races, we should also include other race types rather thna the four commonly seen races. Just an idea... JerryWiffleWaffle :) 15:16, March 13, 2011 (UTC)

That's a wonderful idea! Which other types of races do you mean? Well, let's hope Red Polar Ranger Bear will respond here as well, because imo a new design for this wiki should be done as soon as possible. Need for Speed wikia is growing rapidly fast right now, but for all the new pages we make, a clearer structure is required, so that some pages won't be overlooked and possibly forgotten.CMAN122 17:18, March 14, 2011 (UTC)

Races from Underground 2 such as Street X (needs a page I think) or URLs (Underground Racing League, needs a page too). Or the race type from the original Underground, Elimination I think it's called, where the last racer on a lap gets eliminated. It's also reintroduced in Shift if you are ranked as an Aggressive Driver. I think there are other races in different NFS games, but I don't think that we would want to include all of them, but we should at least include the important ones, such as the ones I mentioned above. And yes, a clearer structure will be required for all the pages we create... JerryWiffleWaffle :) 19:54, March 14, 2011 (UTC)

Instead of URLs I'd rather place Tournaments, since URLs are tournaments... Tournaments were already featured in classic NFS games. Oh yeah, what do you think how we should merge strategies into the mainpage? CMAN122 20:07, March 14, 2011 (UTC)

We could try, but if we are, we should try the strategies that the police will do to try and stop the player. There are pages for those (Box, Ram, etc.). Anyways, we could also create some pages on strategies, but if that doesn't work out, then we shouldn't merge strategies on the main page.

Yeah, we have enough collected ideas for now and no we don't have the options to modify the mainpage and theme. I haven't had a reply from RPBR yet, and I haven't seen him on the wiki ever since I messaged him. So I don't know when he is going to reply... JerryWiffleWaffle :) 18:38, March 16, 2011 (UTC)

After we are done with the mainpage, we should focus on improving the quality of some articles. My suggestion would be, to create a standard layout fo every article about cars first. This would be my suggestion (again i apologize for this fugly mess) 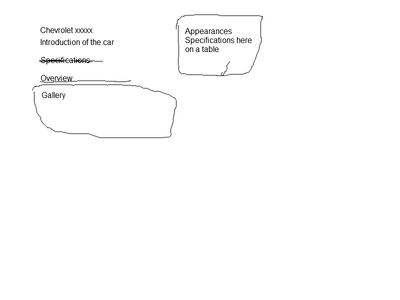 Inspirations were mostly taken from this nicely done article about the Bugatti Veyron 16.4

Yes, that's gonna take a hell lot of time to make all that stuff, but the end results shall be more than satisfying for both us editors and readers.Luckily it's weekend soon and I hope RPBR will return. Anyway if he for some reason didnt notice this thread, we might put this on the talk page from the mainpage.

Sorry, but really can't say the new theme was great, in fact they really annoy and hurt my eyes. It's too dark, the page looks old and dusty, the colour doesn't fit the old contents like the black tables at SCPD#Vehicles. It formerly was a very well readable and tidy looking wiki before you changed all the colours. Now you cannot read anything on projectors for example. Maybe you rethink this change. Dark on bright is better than bright on dark. Don't like - won't visit again. - Chris 15:50, April 17, 2011 (UTC)

All the colours used here are from a preset colour scheme, they're designed to be aesthetically pleasing. Just because you don't like it, doesn't make it bad. -- Some Color Mage ~ (Talk) 21:39, April 17, 2011 (UTC)

True, it's preset, but the contents were designed for white/blue background/theme I think, and this is also what looked best, my honest opinion :) Yellow on gray hurts in my eyes, really physically hurts, not for aesthetical matters. It hurts because it's so hard and exhausting to read with that colours. - Chris 16:24, April 18, 2011 (UTC)

Yes, but the popups are still hard to read. I'm webdesigner and have an add-on called "Stylish". I can make up my own CSS stylesheets for pages. I made one and screened my stylesheet result for you: http://awesomescreenshot.com/023btrw3a (current theme for comparison) - Chris 19:12, April 22, 2011 (UTC)

Well, I cannot for the life of me figure out where the code for the b/g of the navpops are, so if you want to post your CSS somewhere, go ahead (your personal CSS should be User:LWChris/wikia.css, but since I only use personal CSS to kill features I don't like, I'm not sure how it'll work with colour changes) and I'll try it out. -- Some Color Mage ~ (Talk) 22:01, April 22, 2011 (UTC)

Hi, I tried it, but as I expected, your site's rules sometimes overrule my personal CSS. That applies for the popups, too. Sorry... However I think the old white theme gets closest to what my skin does. The site's CSS is at MediaWiki:Wikia.css, where you could define some rules for the popups. I'll try around a bit. - Chris 00:44, April 27, 2011 (UTC)

The thing is the navpop code isn't mine, as such I have absolutely no idea what class I need to adjust. That and I have no idea how the CSS for this skin works when it comes for colour changing, as Theme Designer does it all without logging changes.
I'm gonna adjust the background again so the font defaults to black. From then on, I'm not making changes unless I get a large amount of complaints or someone finds a fix for a problem we're having here.
And while I remember to mention it, for the favicons suggested at the top of the page, I can only put it up if it's in .ico format. -- Some Color Mage ~ (Talk) 07:22, April 27, 2011 (UTC)
Use this as favicon if you want: File:Faviconnfswiki.ico
CMAN122 09:09, April 29, 2011 (UTC)

Retrieved from "https://nfs.fandom.com/wiki/Forum:New_design?oldid=81435"
Community content is available under CC-BY-SA unless otherwise noted.