Maximum Cop Probability
Development - Some content may have altered during development.
20_4_1_opm_tollbooth is a Tollbooth event that was cut following its usage at promotional events for Need for Speed: Most Wanted and as an event in the PlayStation 2 demo release.

The event can be found in the game files of the released game and the PlayStation 2 demo, but can not be accessed during game play[1].

It was used for special "Blacklist Tournament" promotional events for Need for Speed: Most Wanted leading up to its 2005 release. Participants had to pass through 10 tollbooths, despite the course having only three, which meant that the players had to perform multiple laps around the course until they reached their 10th tollbooth. 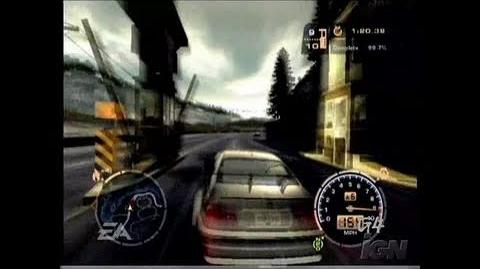 Retrieved from "https://nfs.fandom.com/wiki/20_4_1_opm_tollbooth?oldid=110923"
Community content is available under CC-BY-SA unless otherwise noted.