It was the 'medium' trim, above the RS but below the GS-R and famed Type-R, and could be ordered with a keyless entry system, alloy wheels, leather seats and a CD player. Based on the Honda Integra DC2 series, it was rebadged as an Acura for the United States.

The Acura Integra LS only appears in the Collector's Edition release of Need for Speed: ProStreet. It is classed as a tier 1 car and is available from the beginning with price tag of 18,000 cash.

In comparison with other 100-200 bhp cars with the exception of the Lotus Elise 111R, the Acura Integra LS is capable of reaching the highest top speed. It also has a surprisingly quick acceleration for its engine output. 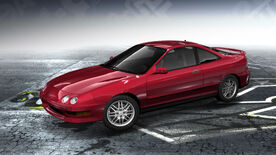 Need for Speed: ProStreet
Retrieved from "https://nfs.fandom.com/wiki/Acura_Integra_LS?oldid=138590"
Community content is available under CC-BY-SA unless otherwise noted.