Need for Speed Wiki
Register
Don't have an account?
Sign In
Advertisement
in: Vehicles, Cars, Acura,
and 11 more
English

The Acura RSX (sold as Honda Integra in Japan) is a sports coupe manufactured and sold by Acura in North America. The base model of the RSX boasts a 2.0L inline-four engine codenamed 'K20A3'. Production started in 2001 and ended in 2006.

The RSX is a decent front-wheel drive car with a higher power output than most tier 1 cars. It can be used effectively by the player during the first portion of the career mode. However, some cars such as the Honda Civic Si and Mitsubishi Eclipse GS-T may be faster. 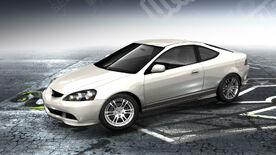