It entered production in 2010 and is the successor to the Alfa Romeo 147. The name "QV" stands for Quadrifoglio Verde. The model was sold as Giulietta Cloverleaf in some markets.

The Giulietta QV received the engine and the six-speed twin-clutch automatic transmission from the 4C production car in 2014 along with consolidation of the name to Giulietta QV in all markets.

The Giulietta QV is featured in the Limited Edition release of Shift 2: Unleashed.

Its performance is rated at D 340 whilst its handling is rated at 3.21. It is available for free in the dealership.

The performance rating of the Giuletta QV suggests that the car is an average performer. Its top speed and acceleration can be beaten by more powerful cars. Its handling is impressive for a front-wheel drive car but not as good as that of the Chevrolet Cobalt SS.

The Giulietta QV is featured in Need for Speed: Edge. 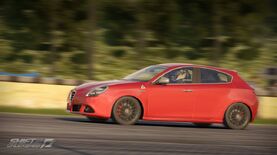 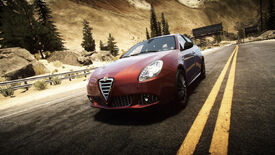 Need for Speed: Edge
Retrieved from "https://nfs.fandom.com/wiki/Alfa_Romeo_Giulietta_QV?oldid=141297"
Community content is available under CC-BY-SA unless otherwise noted.