1145 kg (2524 lbs)
Stub - Why not help by expanding this article with relevant information.

In contrast to other versions of the MiTo, the QV received performance enhancements such as a new suspension, transmission and extra power with the addition of MultiAir electro-hydraulic variable valve actuation technology.

The MiTo QV appears in the Terminal Velocity Pack for the PC, PlayStation 3, and Xbox 360 releases of Need for Speed: Most Wanted (2012) as an Everyday class car.

Purchasing the Terminal Velocity Pack will immediately unlock the MiTo within Singleplayer. It is unlocked in Multiplayer upon the player completing 6 SpeedList events in Everyday class cars.

The MiTo QV is featured in Need for Speed: Edge. 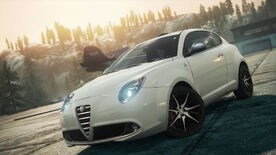 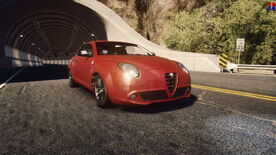 Need for Speed: Edge
Retrieved from "https://nfs.fandom.com/wiki/Alfa_Romeo_MiTo_QV?oldid=129400"
Community content is available under CC-BY-SA unless otherwise noted.