Need for Speed Wiki
Register
Don't have an account?
Sign In
Advertisement
in: Vehicles, 2010s, Alpina,
and 12 more
English

The B6 GT3 was designed to compete in the FIA GT3 Championship. It has earned victories in the 24 Hours of Nürburgring and ADAC GT Masters series.

It comes with a wide body kit featuring a tow hook and front splitter. Other features include a new hood with cooling vents, a racing fuel cell, a roll cage, a rear wing and a diffuser, an exhaust system specifically design for racing, and a Recaro branded driver seat. Michelin racing slicks are wrapped around the vehicle's 18-inch allow wheels. The vehicle also uses body panels made of carbon-fibre.

The GT3 is supported with a 4.4 litre supercharged V-8 engine with 530-hp and 535 lb-ft of torque. It also has a 6-speed Xtrac transmission, which is operated through the use of shift paddles. Weighing less than 3,000 lbs, the vehicle can reach up to 62 mph from a standstill in 3.9 seconds. It is claimed that the vehicle can reach a top speed of 177 mph (285 km/h), if driven along the Nürburgring Nordschleife.[1] 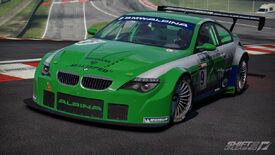