Aquatica is a course featured in Need for Speed III: Hot Pursuit. It is available from the beginning in the PC release, but it is unlocked after competing in the beginner or expert tournament in the PlayStation release.

It also appears in the PC release of Need for Speed: High Stakes being set in the United States and being unlocked by competing in the Memory Lane Tour, Circuit #4.

The course is set at a dusk variation of Atlantica, with a few split canyon routes and an underwater tunnel, the Neptune Tunnel. The player can spot a cruise ship based on the Titanic.

The police vehicles patrolling the course in the Hot Pursuit mode are the Ford Crown Victoria in the PlayStation release or the Ford Falcon EL in the PC release. In Need for Speed: High Stakes, the Chevrolet Caprice and the Chevrolet Camaro Z28 are patrolling instead.

The musical pieces "Rear Flutterblast #19" by Matt Ragan and "Aquila 303" by Rom Di Prisco are played when participating in an event along the course. 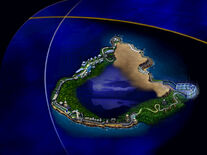