Need for Speed Wiki
Register
Don't have an account?
Sign In
Advertisement
in: Vehicles, 2010s, Ariel,
and 11 more

It boasts a 32-valve 3.0L V8 engine made from two engines of the Suzuki GSX1300R and differs from other Atom variants by the addition of spoilers and a unique paint job.

It was put in a limited production run of 25 units.

The Atom appears as a Race class car. It can be found in various Jack Spots and is available from the start in multiplayer.

Because of a low mass, the Atom is capable of accelerating quicker than any car in the Race class and larger cars from other classes including the Lamborghini Aventador. The Atom has a responsive handling and is useful for drifting but can be difficult to control at high speeds. 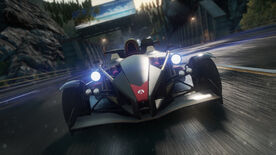