Need for Speed Wiki
Register
Don't have an account?
Sign In
Advertisement
in: Vehicles, 2010s, Aston Martin,
and 12 more

8-speed Automatic
1,870 kg (4,123 lbs)
The 2019 Aston Martin DB11 Volante is an open-top convertible manufactured by Aston Martin and is based on the coupé of the same model range.

As a convertible based on a coupé, the roof is replaced with a folding canvas top with elements of the structure being reengineered to reinforce the overall chassis and maintain the rigidity of the coupé.

Alongside all changes the chassis and the mechanical folding roof, the Volante weighs 110kg (242.5 lbs) heavier than the V8 coupé and on par with the V12 coupé.

Through the increase in weight by strengthening the chassis, Aston Martin only offers the Volante with an AMG V8 to avoid increasing the weight further with their heavier V12.

Springs and dampers for the Volante was also slightly altered to compensate for an increased rear weight bias from 51/49 of the coupé to 47/53.

The DB11 Volante '19 appears in Need for Speed: Heat as part of the Black Market.

It was announced to be part of the March update on March 2, 2020[1], and was made available through the "Collector's Gambit" contract series on March 3, 2020.

and completing chapter 1 of the Campaign Story. 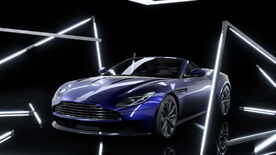