Need for Speed Wiki
Register
Don't have an account?
Sign In
Advertisement
in: Vehicles, Cars, Race Car,
and 12 more
English

The car has a distinctly different body work and a more powerful version of the 5.9L V12 engine in comparison to the DB9. It was frequently used in FIA GT3 Championship sessions and by small motorsport teams in other events. 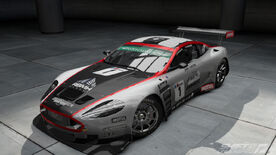