It was featured in the James Bond movies Casino Royale and Quantum of Solace. Production began in 2007 and ceased in 2012 with the Aston Martin DBS being replaced by the Vanquish.

A convertible model was made available in 2009.

References to the DBS V12 are present in the game files of the PC, PlayStation 3, and Xbox 360 releases of Need for Speed: Undercover.

In an early build - Alpha 161 - there are references to the car mesh[1], but in the release there are only references for an unused hood camera and car parts.[2]

Acceleration of the DBS is relatively powerful in contrast to the fastest A class cars in the game. It only gains a moderate amount of speed when using nitrous. The DBS turns well in both slow and quick turns without being a handful. Top speed is 191 mph (308 km/h).

The DBS V12 appears in Need for Speed: Hot Pursuit (2010) as a Super Series racer vehicle, and as an SCPD Rapid Deployment unit.

The racer vehicle is unlocked as part of the SCPD Rebels Pack for the PlayStation 3, Xbox 360, and EA Crew releases. The SCPD unit is unlocked upon the player earning a total of 90,000 cop bounty.

The DBS has a heavy steering response and average acceleration. It is not as competitive in races as a Lamborghini Gallardo LP 560-4 or Aston Martin V12 Vantage, but is still useful in police chases.

The DBS V12 appears as a Grand Tourer class car in the Movie Legends Pack for the PC, PlayStation 3, and Xbox 360 releases of Need for Speed: Most Wanted (2012).

Purchasing the Movie Legends Pack will immediately unlock the DBS within Singleplayer. It is unlocked in Multiplayer upon the player completing 6 SpeedList events in the Pontiac Firebird T/A.

Its statistics are comparable to the V12 Vantage although the DBS is lighter. 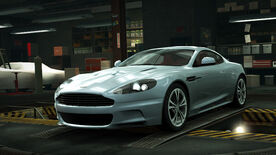 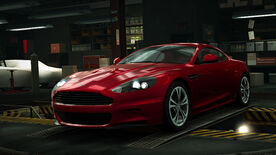 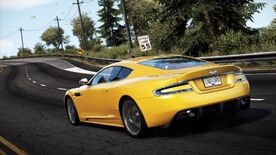 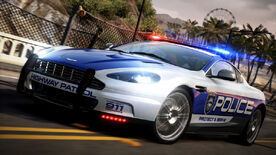 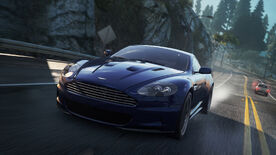 Retrieved from "https://nfs.fandom.com/wiki/Aston_Martin_DBS?oldid=129414"
Community content is available under CC-BY-SA unless otherwise noted.