Need for Speed Wiki
Register
Don't have an account?
Sign In
Advertisement
in: Vehicles, Cars, Aston Martin,
and 14 more
English

It replaces the DBS, which itself replaced the original V12 Vanquish. The Vanquish is available either as a 2-seater or as a 2+2.

It uses the fourth generation of Aston Martin's VH platform, which is lighter than its predecessor due to its extensive use of carbon-fibre.

An upgraded version of Aston Martin's 5.9L V12 engine, an interior inspired by the limited-production One-77 and a Touchtronic 2 automatic transmission are also included.

The Vanquish appears in Need for Speed: Rivals as both an RCPD unit and a racer vehicle. It was the only vehicle to be available to both factions[1] prior to the release of any downloadable content.

It is unlocked for the racer faction upon the player completing any of the SpeedLists offered at rank 2. Once unlocked, it can be purchased for 32,500

The patrol specification of the Vanquish is unlocked upon completing the rank 1 assignment - "It Starts Here".

The undercover specification of the Vanquish is unlocked upon completing the rank 1 assignment - "Ready To Roll".

The enforcer specification of the Vanquish is unlocked upon completing the rank 1 assignment - "It Starts Now".

The Vanquish 2013 appears in Need for Speed: Edge. 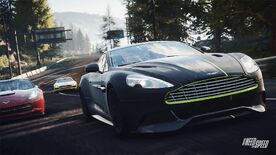 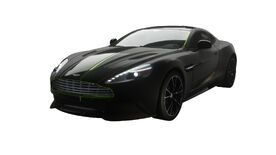 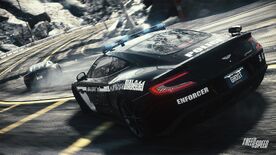 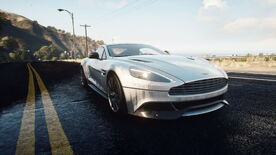