Its 5.0L V10 engine was taken from the Lamborghini Gallardo and fitted with two turbochargers. The Le Mans quattro's design inspired various Audi models such as the first generation Audi R8.

The Audi Le Mans quattro appears in Need for Speed: Carbon as a tier 3 Exotic car, and is driven by Darius, the career's main antagonist.

After defeating Darius in his Boss Race events, the player will unlock Darius' model and another model with the Le Mans quattro's original paint. As both variants are only playable in Quick Race, they cannot be modified.

The Le Mans quattro is featured with both strong handling capabilities and fast straight-line performance, making it a competitive match for any Tier 3 vehicle. 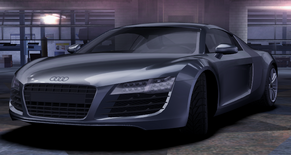 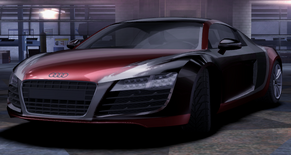 Retrieved from "https://nfs.fandom.com/wiki/Audi_Le_Mans_quattro?oldid=138628"
Community content is available under CC-BY-SA unless otherwise noted.