It was the second most powerful car in the Quattro coupe model range from 1980 to 1991, right behind the homologation Sport Quattro model.

The Audi Quattro is mostly notable for being the first Audi to use the quattro AWD system. The rally version of the car (S1 Quattro) was the world's first rally car to use an AWD system, which helped the S1 to gain huge success in Group B racing.

The Quattro 20 V is notable for being grippy and responsive in corners. It accelerates faster than the Audi A1 clubsport quattro, being almost identical to the BMW M3 Sport Evolution in that field. Top speed is 161 mph (259 km/h).

Stub - This article section needs expanding with relevant information.
The Quattro 20 V made a cameo appearance in the Underground Challenge Series trailer for Need for Speed: The Run on September 1, 2011, and was later officially announced to be featured in the title.

The NFS Edition Audi Quattro is noted for its grip, performance and powerful acceleration although it also has a lower top speed than some other Tier 4 cars.

The Highclimber Signature Edition is a Tier 5 Sports-class car with a "Normal" handling rating. It puts out 772bhp, gets from 0-60mph in 3.1 seconds, and has a top speed of 220mph.

It is unlocked by beating ten Multiplayer Objectives in the Hazardous Conditions weekly playlist. 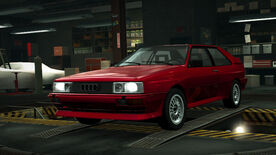 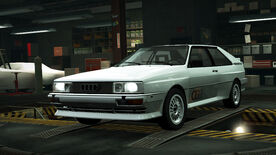 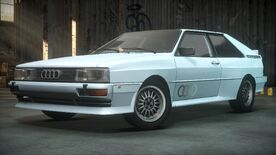 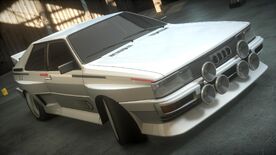 Need for Speed: The Run
(NFS Edition)
Retrieved from "https://nfs.fandom.com/wiki/Audi_Quattro_20_V?oldid=129425"
Community content is available under CC-BY-SA unless otherwise noted.