The biggest difference from the Audi R8 4.2 FSI quattro is the replacement of the V8 for a V10 engine sourced from the Lamborghini Gallardo LP 560-4.

Other differences include a slightly altered body and LED lights. Production of the model was launched in 2008, and underwent a facelift in 2012 along with the introduction of a Plus trim.

The R8 5.2 FSI quattro outperforms the the 4.2L variant in every performance aspect. The V10 R8 has acceleration as its best trait, since it is comparable to the fastest A class cars in the game including the BMW M1 Procar. Its nitrous boost is above average as well.

It feels responsive in corners and rarely tends to understeer, although a few cars such as the Porsche 991 Carrera S might be better. Its stock top speed is 190 mph (306 km/h).

The Megabloks style is an unreleased variation included as part of a disbanded Need for Speed and Megabloks promotion.

It is fitted with tuned quality Gromlen performance parts and various aftermarket parts.

The Audi R8 Coupé 5.2 FSI quattro appears in Need for Speed: Hot Pursuit (2010) as a Super Series racer vehicle, and as an SCPD Rapid Deployment unit.

The racer vehicle is unlocked as part of the SCPD Rebels pack for the PlayStation 3, Xbox 360, and EA Crew releases. The SCPD unit is unlocked upon the player earning a total of 845,000 cop bounty.

Every variant of the Audi R8 is notable for having good handling whilst drifting, though they tend to accelerate slower than some vehicles within their class. Due to their slightly heavy weight, they may prove to be durable in events involving the SCPD or weapons.

The Audi R8 5.2 FSI quattro appears as a tier 4 car in Need for Speed: The Run, and is available from the beginning in The Run mode.

It has a "normal" handling rating and is featured with a quick acceleration. Top speed is 195 mph (314 km/h).

The Darius signature edition is a tier 4 car that is unlocked upon earning a gold medal in all Carbon challenges in the Challenge Series. It has a "normal" handling rating.

The tier 5 NFS Edition is unlocked upon beating 25 Autolog recommendations, and it has an "easy" handling rating.

The tier 6 NFS Edition is unlocked upon beating 20 Objectives in the NFS Edition playlist, and it has a "normal" handling rating. 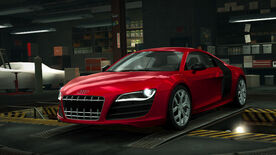 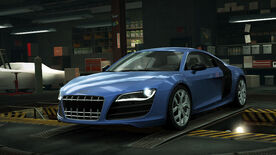 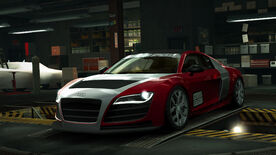 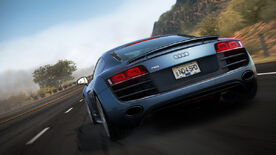 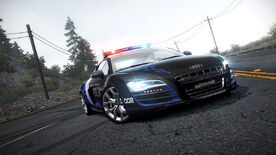 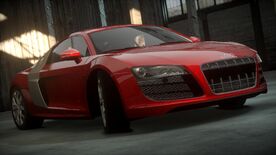 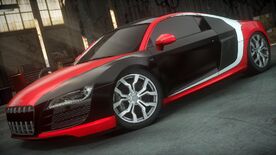 Need for Speed: The Run
(Darius) 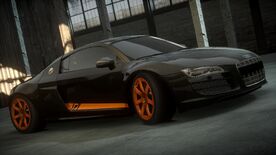 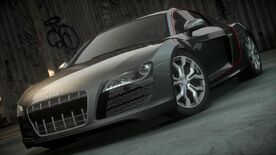 Retrieved from "https://nfs.fandom.com/wiki/Audi_R8_5.2_FSI_quattro?oldid=138631"
Community content is available under CC-BY-SA unless otherwise noted.