It is an open top variant of the limited run Audi R8 GT. Only 333 units of the Spyder were built after the completion of 333 coupé models.

The GT Spyder features an array of improvements over the Spyder 5.2 FSI quattro including a lightened curb weight, increased engine power, an increased top speed, and a 0.3 second quicker 0-60mph time.

The GT also features a wide variety of visual enhancements such as red brake caliper covers, a fixed rear spoiler, front bumper winglets and an assortment of GT badges across the body.

It appears as a Sports class car, which is unlocked in singleplayer upon finding one of its Jack Spots. It is unlocked upon reaching SpeedLevel 66.

The R8 GT Spyder and the Lamborghini Gallardo LP 570-4 Spyder Performante are the fastest accelerating Sports cars in the game. The R8 is slightly slower than the Gallardo but has more precise steering. It can be used for long drifts, since it steers well at any speed.

Players may find it useful for competitive races including events with Exotic cars, as modifications are highly beneficial to the car. 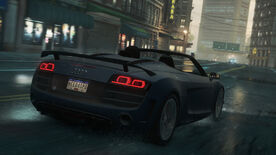