Compared to the coupé, it lacks sideblades along with a modified body and chassis.

The Spyder appears in Need for Speed: Hot Pursuit (2010) as an Exotic Series racer vehicle.

The racer vehicle is unlocked upon the player earning a total of 138,750 racer bounty. In terms of performance, it is very similar to the coupé.

The Audi R8 Spyder 5.2 FSI can be found in the directory of Shift 2: Unleashed and can occasionally appear as an A.I. opponent vehicle. 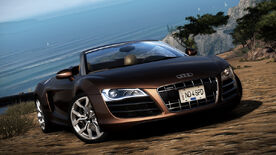 Retrieved from "https://nfs.fandom.com/wiki/Audi_R8_Spyder_5.2_FSI_quattro?oldid=138636"
Community content is available under CC-BY-SA unless otherwise noted.