Need for Speed Wiki
Register
Don't have an account?
Sign In
Advertisement
in: Vehicles, 2010s, BAC,
and 11 more

6-speed Sequential
540 kg (1,190 lbs)
Stub - Why not help by expanding this article with relevant information.

It is powered by a naturally aspirated 2.3L inline-four Ford 'Duratec' engine tuned and supplied by Cosworth.

The BAC Mono appeared in the first gameplay feature series video for Need for Speed: Most Wanted (2012) on September 18, 2012.

It appears in the final release as a Race class car. The Mono can be found in various Jack Spots. It is unlocked upon reaching SpeedLevel 19 in multiplayer.

The BAC Mono is an agile car with powerful acceleration, comparable to cars such as the McLaren MP4-12C. The Mono has a more controllable handling than the Ariel Atom 500 because of better traction and more precise steering, but lacks slightly in acceleration.

It can perform quick manoeuvres in pursuits. However, the Mono also has an inferior durability in comparison to vehicles from other car classes. 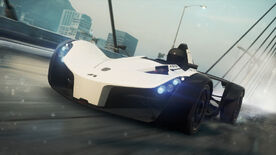