Need for Speed Wiki
Register
Don't have an account?
Sign In
Advertisement
in: Vehicles, Cars, Traffic,
and 16 more

The 1 Series Coupé was available with a high number of naturally aspirated and turbocharged engines - the BMW 135i Coupé is powered by a turbocharged 3.0 litre inline-six engine, the top-of-the-line model, the BMW 1 Series M Coupé, featured the same engine in a twin-turbo configuration.

The 128i appears in Need for Speed: Payback as a traffic vehicle.

The 128i appears in Need for Speed: Heat as a traffic vehicle. 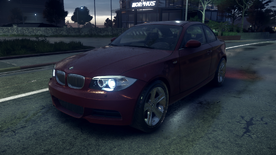