The BMW 1 Series M Coupé (also known as the BMW 1M Coupé) is a high-performance variation of the BMW 135i Coupé.

Unlike previous M cars, it boasts a twin-turbo N54 engine which is also used by the BMW Z4 sDrive35is. Its name differs from the M nomenclature to avoid confusion with the BMW M1.

The car was originally planned as a limited run of 2,700 units but due to customer demand, the plan was scrapped and by the end of production in June 2012, a total of 6,331 units were produced.

The M Coupé is an very agile car but can be twitchy in corners due to slight fishtailing. It accelerates quicker than the BMW M3 Sport Evolution and utilises a powerful nitrous boost. Top speed is 178 mph (286 km/h).

The Schnell style is a drag car that costs

The 1 Series M Coupé appears in Need for Speed: The Run as an unlocked tier 2 vehicle.

It has the highest top speed in the Tier 2 category. It also has quick acceleration and a "Normal" handling rating.

The NFS Edition is unlocked upon beating 20 Autolog Recommendations but is already unlocked as a Need for Speed VIP gift to players whom played the demo. It is a decent tier 4 car with good acceleration and a "normal" handling rating. Top speed is 192 mph (309 km/h).

The Art Director Signature Edition is unlocked upon reaching Driver Level 18. Its best traits are acceleration and a top speed of 215 mph (346 km/h). It has a "challenging" handling rating.

The 1 Series M Coupé appears as an Everyday class car in Need for Speed: Most Wanted (2012) as part of the Terminal Velocity Pack.

It is unlocked in single player immediately upon purchasing the Terminal Velocity Pack and is unlocked in multiplayer by completing 12 events in Everyday class cars.

The 1 Series M Coupé makes up for its low top speed with its agility in corners with excellent acceleration.

The 1 Series M Coupé appears in Need for Speed: Edge. 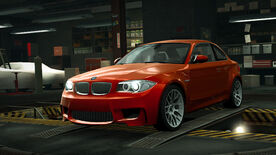 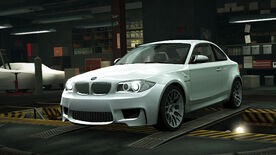 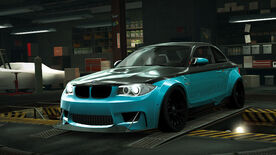 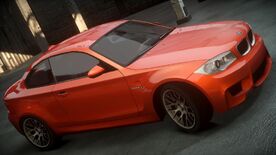 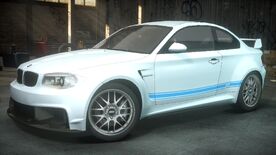 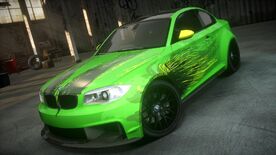 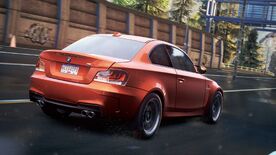 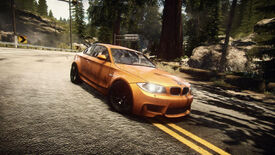 Need for Speed: Edge
Retrieved from "https://nfs.fandom.com/wiki/BMW_1_Series_M_Coup%C3%A9_(E82)?oldid=138660"
Community content is available under CC-BY-SA unless otherwise noted.