Need for Speed Wiki
Register
Don't have an account?
Sign In
Advertisement
in: Vehicles, Cars, Traffic,
and 15 more

The BMW E34 appears in Need for Speed II as a traffic car that is commonly found in North Country.

It can be unlocked as a playable vehicle by entering a cheat code at the main menu;

The E34 appears in Need for Speed III: Hot Pursuit as a traffic car. It has similar model and textures to the previous game, although it appears in unlicensed form, with front grille and headlights slightly altered.

Players can drive it upon entering the code "go04" in the PC release. 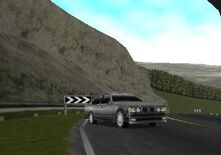