Need for Speed Wiki
Register
Don't have an account?
Sign In
Advertisement
in: Vehicles, 1990s, BMW,
and 12 more

The 850CSi is a high performance variant of the 850i, and became the top of the range specification in 1992. Tuning the 850i's 5-litre V12 to a 5.6-litre V12, the CSi's engine was given a new engine code alongside a Bosch Motronic fuel injector.

Exterior alterations to the CSi include, reshaped rear and front bumpers for aerodynamics, and reshaped wing mirrors. The interior has two-tone leather and sport seats.

Production of the CSi ended in 1996, with the 5.6-lire V12 requiring extensive alterations to meet emission regulations for production to continue. 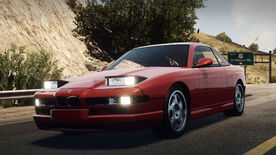