Need for Speed Wiki
Register
Don't have an account?
Sign In
Advertisement
in: Vehicles, 2000s, BMW,
and 14 more

The acronym in the limited edition M3's trim stands for "Coupé Sport Lightweight", named after the 1972 BMW 3.0 CSL, and was limited to a production run of 1,400 cars for release in the European market.

Based on the BMW M3 (E46), the CSL was developed with a lighter overall mass as a prime target, based on technology crafted from research by BMW's Formula One racing team.

Sound proofing was removed, alongside adding carbon fibre body parts and improved braking through larger rear calipers, the CSL matured to a 50:50 weight distribution whilst losing 150 kg (331 lbs). It was also only sold with the option of two metallic body colours; Black Sapphire or Silver Grey.

The M3 CSL appears in the language files of Need for Speed: Most Wanted. Despite the files referencing a BMW M3 CSL, there is no mesh resembling the car present in the game. 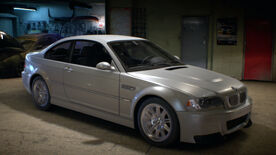