The BMW M3 GTR (E46) is a road-legal homologation produced by BMW to allow the V8-powered M3 GTR race car to compete in the 2002 American Le Mans Series season. It had a limited production run of 10 units and was engineered as a near perfect replication of the racing M3 GTR.

The car shares many of the weight saving aspects from the race car which it is based on. Large amounts of carbon fibre are used on the body for parts such as the roof and the rear spoiler, which also improves the car's aerodynamics in much the same manner as the race car. The street variant has nearly no forms or manifestations of comfort equipment.

The 4 litre V8 engine is similar to the V8 engine used in the racing car although it has been adapted and altered to meet emission standards as well as noise regulations.

Despite BMW's efforts, ALMS rules were changed for the 2002 season and required that at least 100 units and 1,000 engines be built for a car to qualify for the season, forcing BMW to withdraw from the series.

The BMW M3 GTR (Street) appears in the Black Edition release of Need for Speed: Most Wanted. It can only be used in Quick Race and cannot be customised.

The Street model's performance is inferior to its Race counterpart and therefore not suitable for competing against the fastest cars in the game.

It has decent acceleration due to its short gear ratio, making its performance on par with cars such as the Lamborghini Murciélago. It also has a great handling making it a great car for twisty tracks. Nitrous is equipped as standard.

The M3 GTR (Street) is unlocked in the Game Boy Advance release once the player beats Blacklist Racer #1 - Razor.

The car has a powerful acceleration but an average top speed and a handling rating lower than the vehicles of other high-ranked Blacklist racers.

The BMW M3 GTR (Street) was added into the car dealership on March 5, 2010 during the first closed beta as a tier 3 vehicle. Since August 22, 2012, it has been featured as a B class vehicle.

The M3 GTR performs well within its class due to well rounded performance traits including a powerful nitrous boost and good handling. It can master high-speed as well as low-speed corners quickly thanks to sufficient traction and a high steering precision.

In terms of acceleration, it can keep up with other B Class cars, although it might be lacking to A class cars with high overall ratings. Top speed is 186 mph (300 km/h).

Players may find the car to be a valuable competitor for racing. Despite its underwhelming power, the M3 GTR has better handling than most in-game cash offered cars such as the Ford GT, which has somewhat stiff handling. The Lotus Evora outperforms the M3 GTR but is also less useful in police chases because of a lighter body.

4000. It was made available as part of the first closed beta session.

1,400,000. It was released on July 27th, 2010 as a replacement for the Black style, which in turn had been available in several beta test sessions prior. A Driver Level of 40 was required before a player could purchase it, but this requirement was removed on August 22, 2012.

It is fitted with an aftermarket lowering kit.

5900. It was briefly made available without notice on June 18, 2013, but was promptly removed and highlighted as a mistake on the part of Easy Studios.

It later was available through a limited time offer as part of a special BMW celebration lasting from March 6th to March 9, 2015.

It is fitted with unique performance parts, Skill Mods, and aftermarket parts.

Need for Speed: Most Wanted
(GBA) 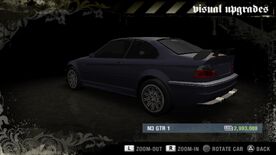 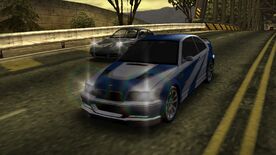 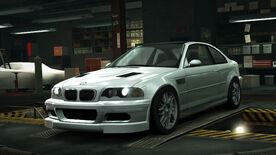 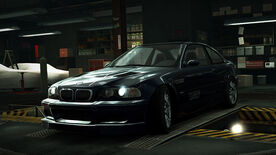 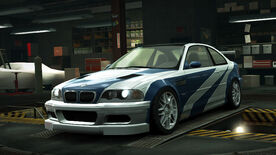 Need for Speed: World
(Most Wanted)

Retrieved from "https://nfs.fandom.com/wiki/BMW_M3_GTR_(Street)?oldid=135375"
Community content is available under CC-BY-SA unless otherwise noted.