LCI, which stands for Life Cycle Impulse, is intended to reinvigorate models in BMW's range with new technology partway through their product life cycle.

In 2017, the M4's LCI trim was introduced and replaced the M4 that had been on sale since 2013. As the new base M4, it is fitted with previously optional LED headlights, LED tail lights, an updated ConnectedDrive navigation system, new inter stitching, and additional interior M badges.

Its suspension has also been tweaked to improve its handling without sacrificing comfort.

The stock M4 LCI F82 can be unlocked in Need for Speed: Heat. 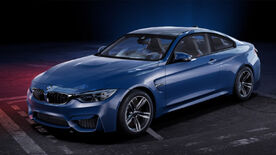 Retrieved from "https://nfs.fandom.com/wiki/BMW_M4_LCI_(F82)?oldid=140174"
Community content is available under CC-BY-SA unless otherwise noted.