The most noticeable traits of the M6's exterior are the carbon-fibre roof and five spoke wheels. Until the car's production ended in 2010, over 14,000 exemplars were sold.

The BMW M6 appears in Need for Speed: Undercover as a tier 2 car and is unlocked upon the player reaching Wheelman level 9.5.

The M6 has mediocre acceleration and a low top speed of 217 mph (350 km/h) in comparison to other tier 2 cars. It possesses a responsive and stable steering as compensation.

Chase Linh's BMW M6 is also featured in the Boss Car Bundle. It is a more powerful variant of the one the player receives from Carmen before the Job, Betrayed, and comes fitted with nitrous.

The M6 has short gear ratios, resulting in quick acceleration times. However, once the player reaches the final gear, which has the tallest ratio among the gears, its power shows a notable decrease. Other similarly ranging cars might be able to reach their top speed sooner than the M6.

It also has a more powerful nitrous boost than the BMW M3 Sport Evolution and turns very precisely in corners without losing any traction. It weighs as much as most BMW cars in the game. Top speed is 189 mph (304 km/h) and 210 mph (338 km/h) with nitrous.

The M6 is a good alternative to the M3 Sport Evolution due to its well rounded performance and being available for in-game cash.

The BMW M6 is featured in Shift 2: Unleashed as a Modern Road vehicle with an 890 performance index and 2.91 handling rating.

The M6 with standard performance possesses an adequate acceleration and grippy ride. Its rear can break out when the car is moved too quickly. Players can apply a Works upgrade to the M6 to improve performance substantially. 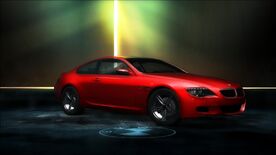 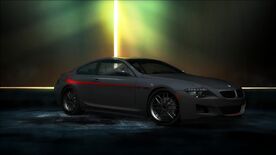 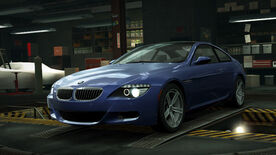 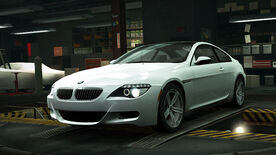 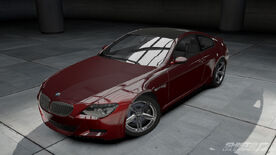