Need for Speed Wiki
Register
Don't have an account?
Sign In
Advertisement
in: Vehicles, 2010s, BMW,
and 12 more

It has an M-tuned xDrive all-wheel drive system for improved traction, given the higher performance engine, and an altered Dynamic Performance Control to better distribute torque.

The X5M 2014 appears in Need for Speed: Edge with an A class performance rating. 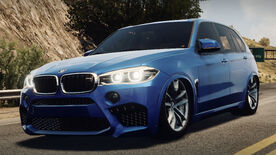