1470 kg (3241 lbs)
The BMW Z4 M Coupé is a high-performance sports coupé variant of the first generation Z4 from BMW.

It was introduced shortly after the the Z4 lineup received a facelift in 2006 and shares many technical similarities with the BMW M3 (E46), including its engine.

It performs well in Grip and Drift events. Its responsive handling and good acceleration make it a competitive tier 3 car.

The BMW Z4 M Coupé appears in the Collector's Edition release of Need for Speed: Undercover as a tier 2 vehicle.

Top speed is 204 mph (328 km/h) with a stock BMW Z4 M Coupé, which is beaten by the majority of the tier 2 class. Even with all upgrades available in the game, the car cannot surpass the top speed of the BMW M3 E46, which also has a low top speed. This deficiency is balanced by responsive handling.

It is not capable of a Works conversion and has a performance rating of 5,70. The M Coupé is therefore a decent performer in Shift. Due to the front-engine, rear-wheel-drive layout, it is prone to oversteer in corners though.

Best trait of the Z4 M Coupé is handling, since the car is balanced in corners and responsive to steering inputs. Acceleration is on the same level as the Renault Clio V6 and other fast D class cars. Its nitrous boost is average. Top speed is 147 mph (236 km/h).

Before August 22, 2012, it could only be purchased if the player was at Driver Level 15 or above and cost

The White style is a pack car included as part of the Origin Starter Pack.

The Limited Edition style is an art director car initially released as a top-up gift from February 16, 2011. It was later offered as a reward for inviting three friends to play Need for Speed: World via Facebook.

The Tony's Pizza style is a rental car that could be leased by redeeming a promotional code from a Tony's Pizza box. It was available from September 1, 2011 to December 31, 2011, but only to North America residents.

It is not fitted with any performance parts, but does feature several aftermarket parts and a unique Tony's Pizza livery.

The BMW Z4 M Coupé appears in Shift 2: Unleashed as a Modern Road vehicle with a price tag of $45,200. It has a performance rating of D 610 and an 3.44 handling rating. Compared to the BMW Z4 sDrive35is, it has a higher handling rating. 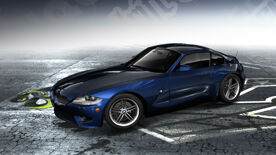 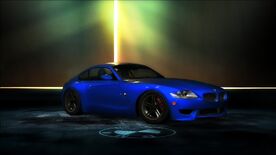 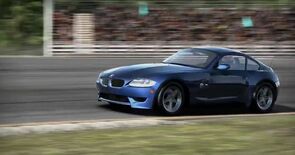 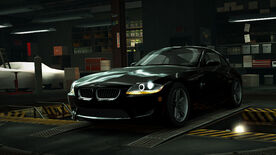 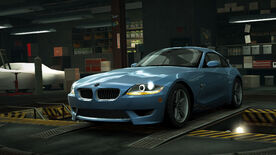 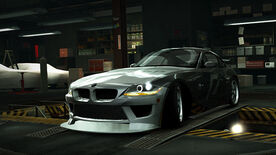 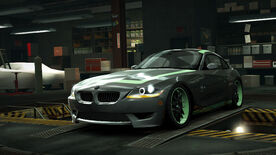 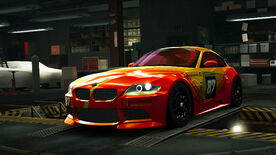 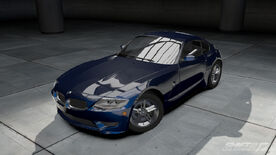 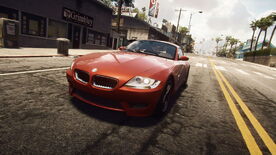 Need for Speed: Edge
Retrieved from "https://nfs.fandom.com/wiki/BMW_Z4_M_Coup%C3%A9_(E85)?oldid=138702"
Community content is available under CC-BY-SA unless otherwise noted.