Need for Speed Wiki
Register
Don't have an account?
Sign In
Advertisement
in: Vehicles, 2010s, BMW,
and 18 more

7-speed Automatic
1,610 kg (3,549 lbs)
Stub - Why not help by expanding this article with relevant information.

It is the first Z series BMW to use a 7-speed double-clutch gearbox. The car is powered by a 3.0L twin-turbo I6 (N54B30) producing 335bhp and comes standard with the M Sports Package. The N54B30 engine is also utilised in the BMW 1 Series M Coupé.

The Z4 sDrive35is appears in Need for Speed: Hot Pursuit (2010) as a Sports Series racer vehicle.

The racer vehicle is unlocked upon the player earning a total of 20,000 racer bounty.

It is one of the fastest cars within its class like the Porsche Boxster Spyder, and possesses strong drifting capabilities.

Its driving traits are similar to that of the BMW Z4 M Coupé, even though the sDrive35is has a notably lower performance rating (510) and handling rating (3.08).

The Z4 sDrive35is appears in Need for Speed: Hot Pursuit Remastered as a car tier 2 vehicle available to racers and is not available as an SCPD unit.

It is one of the fastest cars within its tier and is easy to drift.

The Z4 sDrive35is is a Sports Series racer unlocked upon earning 30,000 racer bounty. 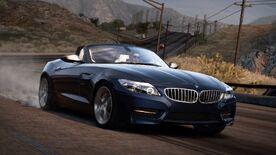 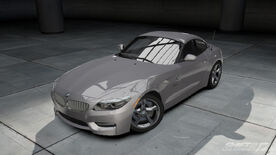 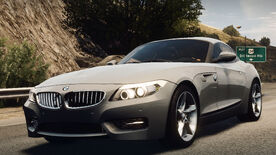 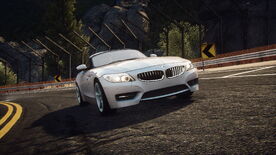