Need for Speed Wiki
Register
Don't have an account?
Sign In
Advertisement
in: Vehicles, 2010s, BMW,
and 14 more

Announced at the 2009 Frankfurt Auto Show as the "Vision EfficientDynamics Concept", it was showcased as BMW's vision for a new generation of combustion engine and electric hybrid cars, fitted with an inline-3 turborcharged diesel engine with two electric motors.

Going on sale in 2014, it sold over 1,500 units, and sold nearly 5,500 units in 2015, making it the best-selling hybrid sports car. Although it outsold all other hybrid sports cars combined for its first two years on sale, it quickly gained a reputation for high depreciation and expensive mantinance.

The LCI (Life Cycle Impulse) is a mid-to-late update to an aging product in the BMW lineup, and is used as a means of invigorating any market interest in a product without the need for developing a new model. In 2017, it was fitted with new headlights, new lighter wheels, a new bonnet air shutter, and a "coupé" c-pillar badge to denote the difference from the new roadster introduced the same year.

The i8 Coupé '18 appears in Need for Speed: Heat following its brief appearance in the official reveal trailer, which was released on August 14, 2019.[1] An article, revealing it to be part of the game's official car list, was published[2][3] on August 19, 2019, and appears in the NFS: Heat Studio app as part of container 1, which was included with the release of the app.

The i8 Coupé "K.S." '18 is included as part of the Deluxe Edition release of Need for Speed: Heat.

, at which point it is also unlocked for purchase from the car dealer for 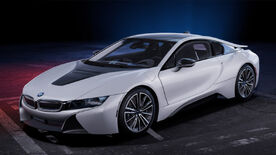 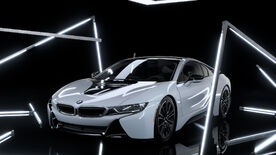 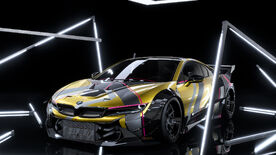