Need for Speed Wiki
Register
Don't have an account?
Sign In
Advertisement
in: Vehicles, 2010s, BMW,
and 13 more

It was first shown at the 2012 Beijing Auto Show as the 18 Spyder Concept fitted with an inline-3 turbocharged petrol engine, which would also be fitted to the production coupé that would go on sale two years later in 2014.

The spyder concept had few exterior differences between it and the coupé concept, with the exception of solid metal doors and rear roll-over hoops, although underneath it had a shorter wheelbase and had only two seats. It was also the first vehicle from BMW showcasing their eDrive tehcnology.

A production i8 Roadster was first shown at the 2017 Los Angeles Motor Show, alongside the refreshed i8 LCI coupé, and went on sale in May 2018.

Compared to the LCI coupé, the roadster has an electric folding soft-top roof, 2-seater layout, frameless doors, and a "roadster" c-pillar badge. The rear seats removed from the roadster were repurposed into a space for the folding fabric roof.

Production ran from May 2018 to April 2020, with the announcement being made in September 2019, and a BMW Vision M NEXT concept car unveiled in June 2019 as the i8's successor was also cancelled.

The i8 Roadster '18 appears in Need for Speed: Heat following an article revealing it to be part of the game's official car list was published[1][2] on August 19, 2019, and appears in the NFS: Heat Studio app as part of container 4, which was released on September 10, 2019. 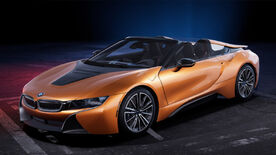 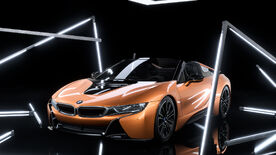