Bayview is a fictional city on the west coast of the United States of America, in which Need for Speed: Underground 2 takes place. It contains four main districts: City Core, Beacon Hill, Jackson Heights, and Coal Harbor.

The player travels to Bayview six months after the events of Need for Speed: Underground in Olympic City.

The city is divided into four districts with each connected by only a few roads. The most northern district is called Jackson Heights and just south is Beacon Hill. The central area is called City Core and the most southern part is Coal Harbor. There's an airport in the City Core district.

This district is available to players at the beginning of the title's career mode. It resembles a typical large city center as it features some tall buildings but also features districts where there are only small houses and narrow alleyways. It's surrounded by a mostly elevated interstate known as Highway 27.

There's also an underground tunnel running through the center of the core. There are five hidden shops in this area: 2 body shops, a car specialties shop, a graphics shop and a performance shop. There's also a non-hidden performance shop, a car lot and the player's only garage.

A relatively big district occupying the north-western side of City Core. There are many hotels and other large buildings as well as skyscrapers.

The north-east area of the district features an underground freeway that players can drive along to reach Beacon Hill or Freeway 27. City Avenue runs through here. City Center is Bayview's downtown core, with many tall buildings and business headquarters, including the Suomi Lewis building.

This is the only area where Freeway 27's lanes divide around the Stadium. A Car Specialties Shop, Bayview's one and only Megalow Parts Performance Shop, as well as a Car Lot can be found within this district.

The middle of southern City Core features a notable Asian population due to the presence of Asian signage throughout. The district features many race events due to its small alleyways and wide main roads which both feature progressive turns.

There are multiple casinos in South Market and an animated canopy similar to the Fremont Street Experience in Las Vegas, Nevada. Jackpot Casino and Bingo Club is near the canopy. Another major landmark is the large casino that crosses over roads quite a few times.

Fort Union is also a residential district with multiple condos and apartments.

The south-eastern area in Bayview is El Norte. El Norte is an average "lower eastside" district because of its darker roads and alleys. The Bayview EL line is affluent here, criss-crossing above the roads. Graffiti can be seen everywhere. There are also two construction sites, a basketball court, and two Best Buy (or Solo Air in the European release) outlets in El Norte.

The Bayview International Airport is located east of the city core and is connected by the Airport Freeway. This is a very important area as players can enter many Drag and URL events that take place along the runways of the airport.

This is the second area players will unlock access to and is heavily based on Beverly Hills. It is the lower mountainside of Jackson Heights and contains extremely curvy roads.

Beacon Hill West runs from the end of Beacon Hill East to the coast. These two areas are very similar and features many clubs along the road decorated with colourful lights.

Pigeon Park is an area referred to as Brad Lawless Park. It occupies the eastern end of Beacon Hill and the area east of the bridge. It only has one road with a short-cut through a greenhouse and a restaurant. There is also a monument off the side of the road.

Jackson Heights is located high up in the mountains of Bayview containing tricky turns, short straights and a variety of technical routes. It is the only area where players can drift along an open road with traffic.

This area has only two hidden shops; a Body shop and a Graphics shop.

At the north-east there's an observatory which is modelled after the Griffith Observatory in the hills above Los Angeles. The entire city of Bayview can be seen from the peak of the mountain as well as a "BAYVIEW" sign styled after the Hollywood Sign.

Jackson Heights has an events center and gardens in the west. In the east, there are numerous mansions and a polo club. The north has the summit and a broadcasting tower. The observatory area also includes a car park, Capilano Heights, and a museum.

Coal Harbor is the most southern area of the city and is unlocked in two sections. The district is an industrial complex featuring many narrow roads.

Coal Harbor East is the first section of Coal Harbor that players will unlock. The district connects Coal Harbor with the City Core. Players can find four hidden shops and a car lot in this area.

The district contains some old houses, a steel mill, electronics manufacturing area, business centre and a port. There are three highways running to the rest of the city: Highway 7 runs directly to the City Core, the Coal Harbor Freeway runs a bit out of the way before heading into the city core, and the Airport Freeway leading to the Airport.

Coal Harbor West is the final area that players unlock. It only has three hidden shops. The area contains heavy industries, a port and rail yards as well as a Nuclear Power Plant.

Bayview Speedway is an enclosed race track where some URL events take place and is where the Dyno Shop is located. 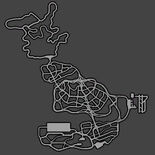 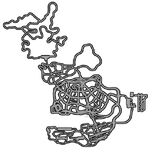 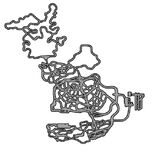 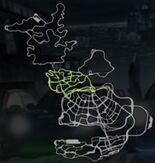