Unknown
The Beck Kustoms F132 is a concept car designed by Aaron Beck, initially in early 2009, as part of Weta Workshop's concept design submission for the pre-production phase of Mad Max 4.

Design of the F132 has been refined since its original sketch under Aaron Beck's Beck Kustoms garage in New Zealand, with many of the early '90s Ferrari Formula 1 cars and the McLaren MP4-12C providing the muse for the overall body.

Construction of the F132, as outlined by Aaron Beck, would begin in CAD (Computer Aided Design) to craft a chromoly space frame with carbon panels, and custom fabricated suspension as well as its components.

A six-speed sequential would be used to send power from a Chevrolet NASCAR V8; inspired by the traditional Chevrolet small block fitted to various 1932 Ford hot rods.

The driver's seat is given preferential treatment, with the passenger seat pushed further into the rear of the cabin, to provide better ergonomics.

The F132 was made available in Need for Speed (2015) following the release of the Hot Rods update on March 3, 2016, and can be purchased for

It is unlocked for purchase from the drag and race class dealerships upon completing chapter 6 - Payback. 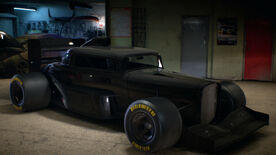 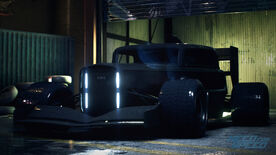 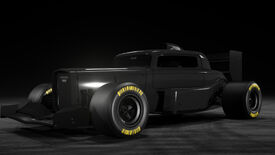 Retrieved from "https://nfs.fandom.com/wiki/Beck_Kustoms_F132?oldid=141276"
Community content is available under CC-BY-SA unless otherwise noted.