Need for Speed Wiki
Register
Don't have an account?
Sign In
Advertisement
in: Vehicles, 2010s, Bentley,
and 12 more

The ISR (Ice Speed Record) is a homage to Bentley's world speed record on ice. The car is painted in a unique colour combination and uses a tweaked version of the 6.0L Twin-Turbo W12. Only 100 were built.

The Supersports ISR appears in Need for Speed: Most Wanted (2012) as a Grand Tourer class vehicle. It can be found in various Jack Spots and is unlocked upon reaching SpeedLevel 54 in multiplayer.

The Supersports ISR is a heavy vehicle, which turns slowly in corners, but can easily withstand collisions with rival racers and FPD vehicles. Its acceleration is comparable with the Ford Mustang Boss 302's. The ISR also has a high top speed to compensate for its poor handling capabilities. 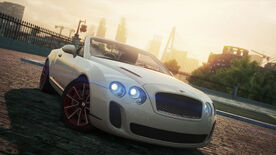