Need for Speed Wiki
Register
Don't have an account?
Sign In
Advertisement
in: Vehicles, 2010s, Bugatti,
and 12 more

7-speed Automatic
1,995 kg (4,398 lbs)
The 2018 Bugatti Chiron is a two-seater hyper car developed and manufactured by Bugatti in Molsheim, France.

It was first shown at the Geneva Motor Show on March 1, 2016 and entered production in March 2017, around a year after first being shown and over 18 months following the reveal of the Bugatti Vision Gran Turismo at the 2015 Frankfurt Motor Show.

Its body is made entirely out of carbon fibre, keeping the weight low and the body effectively stiff, and an all-wheel drive system designed to sustain the high amount of torque sent to all four wheels, which was developed by Haldex.

While it can reach a top speed of 261 mph (420 km/h), it is electronically limited from its theoretical top speed of 289 mph (465 km/h), as no tyre manufacturer currently provides a sustainable compound that can withstand the stresses exerted nearing 300 mph (483 km/h).

The stock Chiron is a hyper class car that requires 60 legendary blueprints to unlock. The blueprints required to unlock the vehicle can be found from various sources; 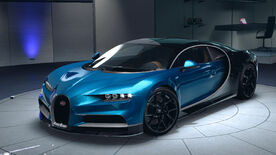