Need for Speed Wiki
Register
Don't have an account?
Sign In
Advertisement
in: Vehicles, 2020s, Bugatti,
and 12 more

7-speed Automatic
Unknown
Stub - Why not help by expanding this article with relevant information.

The 2021 Bugatti La Voiture Noire is a two-seater concept grand tourer developed and manufactured by Bugatti.

As a special variant of the Chiron, shown for the first time at the 2019 Geneva Motor Show, its creation marks of Bugatti's 110th anniversary with the name being derived from a Type 57 SC Atlantic built by Ettore Bugatti's son; Jean Bugatti, of which he named "La Voiture Noire."

It shares various components with the Chiron, with the same 8.0-litre W16 engine and an improved all-wheel drive system, but its entirely carbon fibre body is hand-built and is fitted with a unique set of 3d-printed as well as an LED rear light strip.

While being unveiled in 2019, the La Voiture Noire requires at least two years of development before its single buyer can take possession of their $18.7 million car, which set a record as most expensive new car ever sold.

The La Voiture Noire appears in Need for Speed: No Limits as part of update 4.4.6 and featured in the "Midnight Boulevard" special event that took place from April 21, 2020 to April 28, 2020. The starting performance rating is 865.

The stock La Voiture Noire is a hyper class car that requires 60 legendary blueprints to unlock. The blueprints required to unlock the vehicle can be found from various sources; 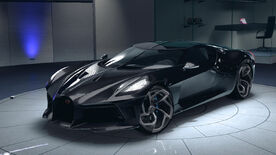