The Bugatti Veyron Grand Sport is a targa top variant of the 16.4 model from Bugatti. The Grand Sport went into production in 2009 and replaced the standard Veyron 16.4 as the base model in 2012.

Like the 16.4 before it, a variety of Grand Sport special editions were made, such as the Bernar Venet and L'Or Blanc.

The Grand Sport appears in Need for Speed: Hot Pursuit (2010) as a Hyper Series racer vehicle.

The racer vehicle is unlocked upon the player earning a total of 1,000,000 racer bounty. It can be driven by both sides of the law in the Nintendo Wii release.

The Grand Sport is quite durable in pursuits thanks to its large mass. Although this also gives the car a slight understeer, exiting corners at a lower speed than most other Hyper Series cars. Performance, when compared to the 16.4 and Super Sport variants, is slightly worse; however, given the small gap in performance perks, this is often treated indifferently. 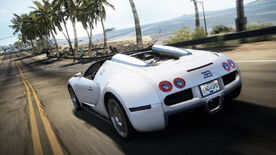