Need for Speed Wiki
Register
Don't have an account?
Sign In
Advertisement
in: Vehicles, 2010s, Bugatti,
and 12 more

It is fitted with the same engine and body kit as the Super Sport model and has a colour scheme reminiscent of the Bugatti Type 37A, which was a supercharged variant of the regular Type 37.

It was first shown at the 2012 Pebble Beach Concours d'Elegance (concourse of elegance) classic motorshow in Monterey, California, USA.

The Grand Sport Vitesse became the last Bugatti Veyron to roll off the production line in March 2015 with the unveiling of the La Finale variant at the 2015 Geneva Motor Show.

The Grand Sport Vitesse appears in Need for Speed: Most Wanted (2012) as part of the Ultimate Speed Pack.

It is an Exotic class vehicle that is unlocked upon completing 6 events in Exotic class cars in multiplayer, but is available from start in single player. 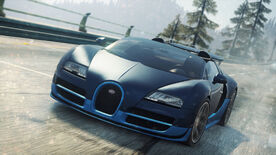