Need for Speed Wiki
Register
Don't have an account?
Sign In
Advertisement
in: Vehicles, 2010s, Buick,
and 10 more

9-speed Automatic
Unknown
Stub - Why not help by expanding this article with relevant information.

The 2015 Buick Avenir Concept is a conceptual 4-door saloon developed by Buick and shown at the 2015 Detroit Motor Show.

It was revealed as the new generation of Buick's aspiration in the luxury car market, and a move towards creating a new flagship vehicle for the brand.

Measuring over 5 metres in length, it takes cues from boat-tail design for the rear of earlier Riveria models. Fitted with a V6, and power being sent through a 9-speed automatic to all four wheels, it's aimed squarely at comfort over performance.

The Avenir Concept 2015 appears in Need for Speed: Edge. 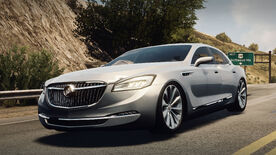