Need for Speed Wiki
Register
Don't have an account?
Sign In
Advertisement
in: Vehicles, 2010s, Buick,
and 9 more

1-speed Automatic
Unknown
Stub - Why not help by expanding this article with relevant information.

The 2013 Buick Riviera Concept is a luxury plug-in hybrid car from Buick that shares drivetrain components with the Chevrolet Volt and the Cadillac ELR.

The Riviera Concept 2013 appears in Need for Speed: Edge. 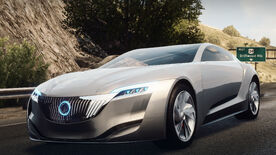