1928 kg (4251 lbs)
The second generation Cadillac CTS-V went into production in the summer of 2008 for the 2009 model year at the Lansing, Detroit GM plant and became available for purchase on November 1, 2008. Cadillac based the CTS-V on the Sigma II platform.

Its nitrous boost and acceleration are average for B class. On straight roads, the CTS-V feels lacking against stronger class competitors although it quickly builds up a strong pace in the middle of its rev range upon hitting its maximum torque output.

The handling of the CTS-V alters drastically based on its speed because of its weight and acceleration. The weight diminishes its ability to avoid traffic at high speed and to sufficiently brake for tight corners. The handling is alternatively very direct at lower speeds. Top speed is 190 mph (305 km/h).

The CTS-V fares better in Pursuits than in racing events. The CTS-V is capable of dodging progressive and constant roadblocks with ease but will suffer when trying to avoid head-on collisions with Rhino Units and could be bogged down when pinned.

It is best suited to low speed courses featuring corners that are very close to each other. 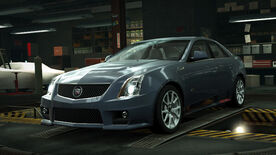 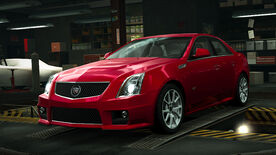 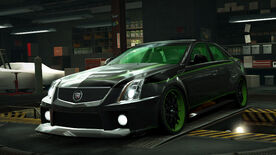