Need for Speed Wiki
Register
Don't have an account?
Sign In
Advertisement
in: Vehicles, Cars, Cadillac,
and 12 more
English

1676 kg (3695 lbs)
The Cadillac CTS is a sports saloon that was produced by the Cadillac division of General Motors.

The CTS marked Cadillac's return to the rear wheel drive market and was the first model made available with a manual transmission since 1988.

The Cadillac CTS appears in Need for Speed: Most Wanted and is unlocked after defeating Blacklist #12 - Izzy. It can be purchased for $32,000.

Due to its weight, the Cadillac CTS is prone to understeer. It is very effective in pursuits and possesses decent performance stats, but it loses its competitiveness in the later stages of the career mode, due to a lack of handling and top speed even with mechanical parts.

The Cadillac CTS can be found in the game files of Need for Speed: Carbon. The model is fully customisable with the exception of some Autosculpt parts or refined performance.

It has four body kits although they all have missing meshes and textures. Since only the mesh of the car is in the game files, it has no performance parts. 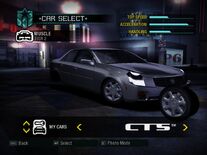