Need for Speed Wiki
Register
Don't have an account?
Sign In
Advertisement
in: Vehicles, Cars, SUV,
and 12 more
English

2558 kg (5639 lbs)
The Cadillac Escalade is a luxury SUV manufactured by Cadillac and based on the Chevrolet Tahoe/ GMC Yukon platform.

The Escalade is internationally known for frequently appearing in popular culture and media along with the Hummer H2 and Chrysler 300C. As such, it is often depicted with highly customised interiors and exteriors.

The Cadillac Escalade appears in Need for Speed: Underground 2 and is unlocked in Stage 2 of the career mode after completing two URL events.

The Escalade appears as one of three playable SUVs, the others being the Hummer H2 and Lincoln Navigator. Compared to both, the Escalade offers the best handling. 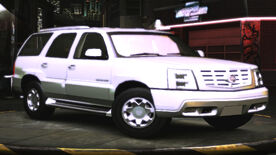 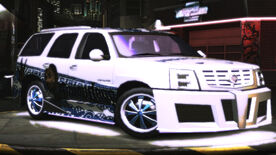