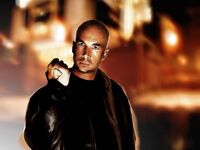 Caleb Reece is the main antagonist of Need for Speed: Underground 2 and is portrayed by David Palffy.

Before Need for Speed: Underground 2

Caleb was the leader of a rival crew that saw the Player's mounting wins and reputation as a threat. He called the player to try to force them to join The Wraiths crew, but the player refused by hanging up.

Caleb ambushed the player whilst he was enroute to a party with Samantha by sitting in a dark alley and activitating the headlights of his Hummer H2. The headlights blinded the player, causing him to crash. This eventually lead to the player traveling to Bayview.

Caleb is known as the most ruthless racer in all of Bayview by the time the player arrives. Rachel Teller tells the player about Caleb and gives them information on how to earn enough rep to race against him.

Caleb starts to notice that the player is earning rep within the city and tries to have members of his crew curb the player's success. Caleb's failure to stop the player's success as well as his psychotic obsession with control over the city causes him to race the player with the consequence of losing the challenge to leave Bayview.

When not in Bayview, Caleb is seen driving a grey or silver Hummer H2. Caleb drives a satin black 2004 Pontiac GTO with unique grim reaper vinyl when the player encounters him in Bayview.

Retrieved from "https://nfs.fandom.com/wiki/Caleb_Reece?oldid=29365"
Community content is available under CC-BY-SA unless otherwise noted.