Being very similar in appearance to Seaside Heights, New Jersey, Camden houses the largest number of industrial complexes in Rockport and beaches. Due to being set in close proximity to watersides, its setting contains many mountainous areas.

Unlike Rosewood and Downtown Rockport, Camden Beach does not features a ring highway but connects the northern and southern side via Route 55.

South Gray Point makes up the central area of Camden Beach and features "The Horn" oil refinery and the Omega Power Station as industrial areas. Within the intersection leading to North Gray Point, the area houses a scrapyard, an old drive-in theatre and a construction site for the future Suburban Shopping Park. To the east of the area, the Camden Penitentiary penal institution is located, which features multiple jumps as shortcuts in many race events.

Ocean Hills is the southern district of Camden Beach. It features industrial facilities on its western side and residential areas on its eastern side. Through Camden Tunnel and Seaside Interchange, which leads to Beacon Point, players may travel to the other side of the river, where Point Camden is located.

Within Ocean Hills' eastern and southern perimeter, the Camden Boardwalk passes along its coastline, where many public beaches, a large fish market, as well as some tourist establishments including the Thrilltown amusement park and some holiday accommodations can be found.

Point Camden is located across the river from Ocean Hills and comprises of the Masterson Naval Shipyard and Beacon Point.

The Masterson Naval Shipyard contains several industrial complexes and many ships under construction such as an aircraft carrier with an accessible deck. A small island known as Beacon Point that connects Point Camden with Ocean Hills can be found east of the shipyard.

A series of notable locations are situated within Camden Beach: 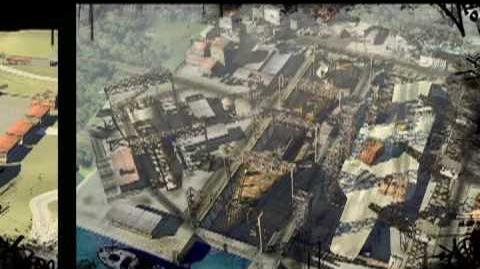 Retrieved from "https://nfs.fandom.com/wiki/Camden_Beach?oldid=148666"
Community content is available under CC-BY-SA unless otherwise noted.