Need for Speed Wiki
Register
Don't have an account?
Sign In
Advertisement
in: Vehicles, 2010s, Carbon Motors,
and 16 more

The prototype concept model was first revealed in 2008. Deliveries of this car were expected by 2012 and it was powered by a BMW diesel engine. This car had everything that a cop dreams of already built-in, as opposed to having after-market equipment installed.

When the car was retired it was to be returned to the factory or sold to another agency, instead of to the public. This car was supposed to compete with the Chevrolet Caprice, Chevrolet Impala, Dodge Charger and the Ford Police Interceptor in the police market. The E7 never entered production along with the TX7 van concept due to Carbon Motors folding in 2013.

The E7 appears in Need for Speed: Hot Pursuit (2010) as an SCPD Highway Patrol unit, unlocked upon the player earning a total of 497,500 cop bounty.

As expected for a purpose-built police car concept, it has amazing offensive capabilities and is almost perfect for vehicular combat, returning above average durability. It also offers the highest top speed in its class, due in part to the SCPD's vehicle tuning. The main downsides are in its sub-par acceleration, and its average handling with a steering response that is somewhat delayed.

The E7 appeared in some early internal review builds of Need for Speed: Most Wanted (2012), but was never released as part of the game. 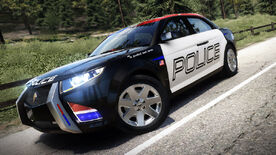 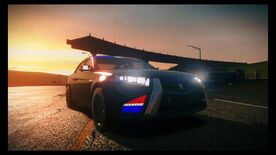 Need for Speed: Most Wanted (2012)
(Rear)
Community content is available under CC-BY-SA unless otherwise noted.
Advertisement