1562 kg (3444 lbs)
The Chevrolet C10 Sidestep is a truck manufactured by Chevrolet between 1960 to 1966 and was part of the first generation of Chevrolet's then-new light full-size pickup truck series.

Design changes to the frame allowed for the cab to sit lower and for independent front suspension. The new truck series also allowed for a new naming scheme for the trucks; two-digit numbers for weight and C or K to indicate either rear-wheel or four-wheel drivetrain.

Between 1960 to 1961, badges were fitted to new trucks based on the naming convention of the previous generation - The Chevrolet Task Force. The lightest trucks - 0.5 ton to 1.5 tons - were offered as the 10 to 40 series with Apache badges, medium trucks were offered as the 50 to 60 with Viking badges, and the heavy 70 to 80 series trucks were fitted with Spartan badges.

C/K trucks were offered with either a Fleetside; smooth, or Sidestep; wide fender, body design and was offered across all light model trucks. Each model year also has a different badge design on the front fender.

Design changes across the first generation included switching from dual to single headlights with the 1962 model and the removal of the wraparound windscreen with the 1964 model.

The C10 Sidestep appears in Need for Speed: Payback following its appearance in the reveal trailer released on June 2, 2017.

It is a derelict car that can be built after finding all five of its parts. The rumour as to the location of its first part is unlocked upon completing the Tyler: Riot Club questline in chapter 3 - City Lights.

The Holtzman C10 Sidestep is based upon Holtzman's C10 Sidestep, and is unlocked upon successfully delivering it to Rav at his airfield during its rotation period as an abandoned car.

The stock C10 Sidestep can be unlocked in Need for Speed: Heat. 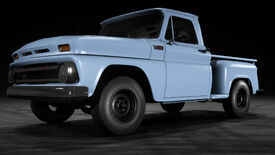 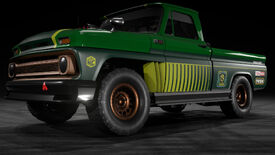 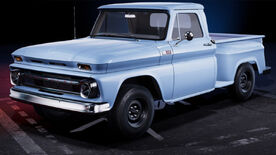 Retrieved from "https://nfs.fandom.com/wiki/Chevrolet_C10_(Gen._1)?oldid=134201"
Community content is available under CC-BY-SA unless otherwise noted.