Need for Speed Wiki
Register
Don't have an account?
Sign In
Advertisement
in: Vehicles, 1950s, Chevrolet,
and 11 more

The features introduced in the Cameo Carrier would help pave the way for the El Camino.

The Cameo Carrier appears in Motor City Online as a classic class car. 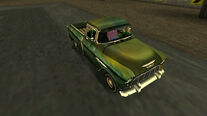