Need for Speed Wiki
Register
Don't have an account?
Sign In
Advertisement
in: Vehicles, 1960s, Chevrolet,
and 12 more

It went into production after the completion of the Mako Shark II Concept designed by Larry Shinoda. The original design of a mid-engined format was abandoned and the design was adapted to the existing Stingray chassis for production.

It was designed and produced in secret with little attention from the general public. It was accidentally revealed in 1968 when a Hot Wheels die-cast model was released under the title of "Custom Corvette." The model was authorised by GM but they weren't aware that the model was going to be released a few weeks before the C3's unveiling.

Released to the public in the midst of runaway inflation, lingering recession, and civil unrest within North America. Despite this the Corvette (C3) went on to set a new sales record with an all-time high of 53,807 produced with the 1979 model.

The Corvette appears in Need for Speed: Nitro as a class B car and costs $45,000. It is rated 2 in speed, acceleration, handling and drifting; and 4 in strength.

A Corvette with a unique livery can be unlocked as a Collectable Car for use in both Arcade Mode and Career Mode, once the player finishes the Silver Cup Grand Prix in 2nd place. 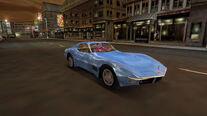 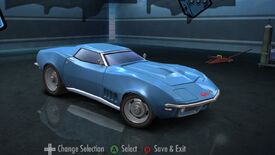 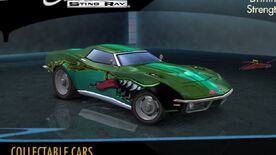